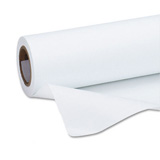 Banner fabric (reinforced vinyl) is a composite material consisting of a high strength polyester mesh in the base and bilateral plastic vinyl coating.

There are two main banner fabric production methods: coated and laminated. Materials obtained in the result of the above methods have significant differences. With the application of lamination production method banner fabric has less frost resistance, tensile strength and service life. Cast materials retain the image applied for up to 3 years under the most unfavorable conditions.

Laminated materials have a significant advantage – low price. So, it makes sense to use them for short-term promotions to reduce the cost.
“Madagaskar” uses a wide range of banner fabrics with different characteristics to solve a variety of tasks. In any case, depending on a specific task, our managers will be able to offer you the most suitable materials to save your budget.

There are the following fabric types for printing banners: 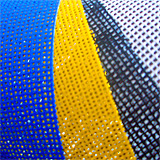 This material is a special non-woven polyvinyl chloride (PVC) mesh, reinforced with a polyester thread. The PVC surface is coated with a special lacquer. The density is 270-320g/m2, opacity is 45%, operating temperature range is from -30 to +70, the tensile strength is 1500 N/cm.

The main particular feature of this material is that due to well-chosen grid size, thread thickness and weave this material is almost not subject to mechanical wind effect, this results in the minimum wind resistance of the banner surface. The above described material structure determines lower, compared to banner fabrics, material density which together with low wind resistance enables to manufacture extremely large-format images. This material is characterized by high dimensional stability, weather resistance (changes in temperature, humidity, UV, abrasion and chemical influence). It belongs to low inflammable materials.

This material is usually used for large-format images printing and further decorative foreside covering of the buildings repaired. Except for decorative function vinyl mesh serves as protection of streets from dust during construction works. Mesh printing is also used for theatrical and studio sets, exhibition stands and points of sales. Lower values of wind resistance and density insure the opportunity to assemble images without special mounting structures. 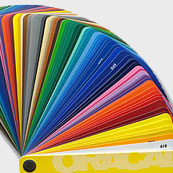 This material is a polyvinyl chloride (PVC) film. In order to insure the required ductility properties of PVC we add special additives – plasticizes. The film working face is coated with a special varnish with both have a protective function and provides high-quality image printing. The reverse film side is covered with adhesive layer. This material has much lower strength parameters, compared to banner fabric. For this reason to protect this material and applied images from mechanical damage we usually use lamination — application of a transparent protective layer over the image. For this purpose we use PVC films with similar structure, called laminate.

According to the manufacturing method the films are divided into calendered and cast. During the production of calendared films the method of material smoothing and compressing to the required thickness is used. The required thickness of cast films is achieved by casting molted material. This method enables to obtain the film with better plasticity performance, because in this case there is no so-called shape memory effect when exposed to temperature differences on the film. The images on calendered film, as a rule, are stuck to simple flat surfaces, such as billboards, signs, and etc. Cast films are used for wrapping complex convex-concave surfaces, such as road and air transport boards. Adhesive films also differ by the type of adhesive layer. There is permanent and removable adhesive layer. If adhesive layer is removable the image applied on such a film can be removed from the surface on which it has been applied without glue residue on it. Film glue adhesion value to the location surface in this case is less than the permanent adhesive layer. Such films are used for short-term application on the surface and should be removed in the future.

The main types of adhesive films: 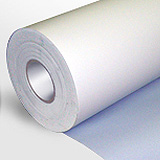 Blue back poster paper (external light), – BlueBack
Strong paper (coated) with high opacity and optimum whiteness. The density is 115-120g/m2. Blue coating applied on the back side enables to stick the poster over dark and multicolored bases – without color distortion and subjacent image showthrough. indisposition for swelling and breaking, high resistance to temperature changes and relative humidity enable to apply this material both indoor and outdoors. The most popular application is for billboards.

Poster paper (indoor lighting) white
Coated paper for illuminated signs. Its density is 150 g/m2. This paper insures brightness and contrast of the printed image, it is resistant to negative external factors, stable in the environment with high humidity. It is used as an advertising medium in light-boxes, billboards with internal lighting.